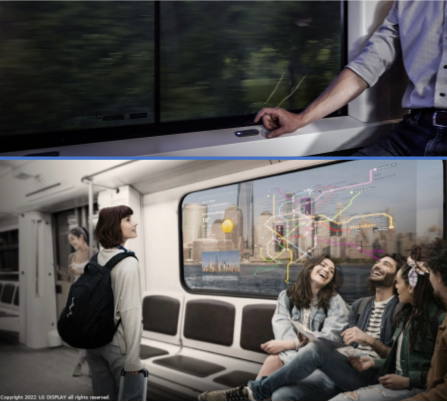 SPD-SmartGlass can reduce CO2 emissions by four grams per kilometer, and increase the driving range of EVs by approximately 5.5 percent.

A series of high-profile showcases of SPD-SmartGlass have begun at various public events in Europe. Last week, in Italy, Suspended Particle Device (SPD) electronically dimmable technology was unveiled in the panoramic sunroof on a new sports car model entering serial production for delivery to customers in the second half of next year. This week, SPD-SmartGlass will debut at two major events in Germany.

Joseph Harary and Eyal Peso, the CEOs of Research Frontiers and Gauzy, respectively noted: “Within the course of one week, new products using SPD-SmartGlass technology were introduced in automotive, trains, architecture, and consumer electronics applications. This is the broadest spectrum of SPD-SmartGlass products for these industries ever shown.”

Research Frontiers is the industry leader and inventor of patented fast-responding SPD light-control technology for use in smart windows and other products. Gauzy is the industry leader in material sciences for smart windows and a licensee of Research Frontiers, as well as a strategic investor in Research Frontiers. Gauzy is a leading manufacturer of SPD light-control film, specializing in coating, and proprietary technology in electronics, control systems, and specialty interlayers and assembly processes. The company sells SPD-SmartGlass products and technologies for the architecture, automotive, aeronautics, mass transit, and boating industries. Gauzy’s SPD LCG® (light control glass) films are produced at Gauzy’s factory near Stuttgart, Germany using chemicals and nanoparticles that Gauzy produces in Israel.

Imagine a light-control film that allows users to instantly change the film’s tint from clear to dark or any state in between at the touch of a button, in response to commonly-used sensors, or integrated as part of a building’s or vehicle’s control system. This SPD-Smart film uses specially-engineered nanoparticles suspended and distributed throughout this flexible film to accomplish this. While it might sound futuristic, it has been used reliably to replace aircraft window shades since 2001, in tens of thousands of vehicles by Mercedes and McLaren beginning in 2011, and is scheduled for introduction on upcoming car models from Cadillac and other auto makers. It also has been featured in yachts, cruise ships, trains, buses and museums (protecting priceless artwork and collectibles from visible light damage), and architectural applications such as a 10 thousand square foot roof at the 2015 World’s Fair in Milan.

Building and vehicle occupants can instantly change the tint of their windows or sunroofs to help keep out harsh sunlight and heat, and create an open-air feeling even when the window or sunroof is closed. Glass or plastic using Research Frontiers’ patented SPD-SmartGlass technology effectively blocks UV and infrared rays in both clear and darkly tinted modes, helping keep interiors cooler, and protecting occupants and interiors while also enhancing security, comfort and privacy. In vehicles such as cars and trains, some of the other benefits of SPD-SmartGlass include significant heat reduction inside the vehicle (by up to 18ºF/10ºC), UV protection, glare control, reduced noise, and reduced fuel consumption. Independent calculations also show that use of SPD-SmartGlass can reduce CO2 emissions by four grams per kilometer, and increase the driving range of electric vehicles by approximately 5.5 percent.

Here is where you can experience this amazing electronically dimmable technology this week (both shows are being held September 20-23, 2022) made possible by Gauzy’s co-developments and partnerships with Research Frontiers and industry leaders:

The markets for SPD-Smart film are already well-established. Research Frontiers has licensed over 40 chemical, film, and glass companies now selling products for the automotive, aircraft, marine, train, museum and consumer electronics industries. Research Frontiers patented SPD-SmartGlass technology is the same best-selling smart window technology that can be found on tens of thousands of various existing cars from Mercedes and McLaren, and on upcoming car models from Cadillac and other auto makers. It can be used to replace mechanical shading elements in buildings and vehicles, and can create privacy on demand.

In addition to having over 70 certified laminators and other industrial partners, Gauzy has an established customer base in built environments and various mobility divisions, strategically aligned with leading brands such as Avery Dennison and Hyundai, and chosen by customers such as LG Display, BMW, Texas Instruments, Gensler, Clestra Hausermann, and many more for light control technology needs. Vision Systems now brings to Gauzy the largest market share of cockpit shading solutions, and new core industries to service including private and commercial aviation, marine, railway, bus and coach, and motorhomes. Trusted customers in these industries include HondaJet, Airbus, Airbus Helicopters, Dassault, Epic Aviation Fritzmeier, Prevost and a number of others.