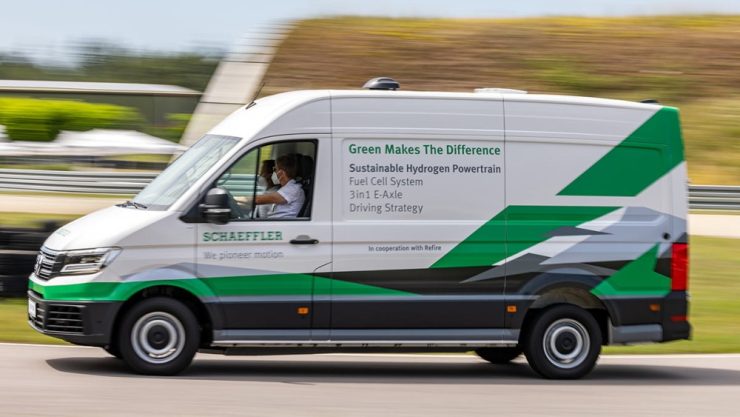 Schaeffler’s focus on drive systems for commercial vehicles includes hydrogen technology, especially for long-haul applications. The company is developing innovative components for fuel cell systems and laying the groundwork for them to be produced on an industrial scale. “Schaeffler sees fuel cells as an important part of the overall mix of drive technologies for commercial vehicles,” said Matthias Zink, CEO Automotive Technologies at Schaeffler AG. The company will premiere at the upcoming IAA Transportation show in Hanover with a demonstration vehicle built from the ground up on the basis of an electric van. To this end, Schaeffler has collaborated with REFIRE, a leading global supplier of commercial hydrogen fuel cell technologies. The vehicle is driven by a 3in1 e-axle powered by a fuel cell system. Its electric axle, fuel cell stack, control system, and energy management system were all designed and built by the e-mobility experts at Schaeffler. Schaeffler is presenting the vehicle as an example of optimal interoperability between electric drive, fuel cell, and lithium-ion battery technology. “Initially, fuel cell drives will be used mainly in long-haul commercial vehicles. Vans will benefit from this technology too because they regularly also cover longer distances,” Zink explained.

The various components and systems that make up fuel cells include bipolar plates. These plates are integral components of the fuel cell stack, accounting for up to 80 percent of stack weight and as much as 65 percent of stack volume, despite each plate being only 50 to 100 microns thick. Schaeffler has been developing metallic bipolar plates since 2017 and is currently making them at a pilot plant at its Herzogenaurach location. The process of manufacturing bipolar plates draws on the company’s extensive expertise in multiple manufacturing processes, including cold forming, stamping, joining, and surface treatment. “We are using our high-precision forming and stamping technology and innovative surface coating processes to make ultra-efficient, high-performance bipolar plates,” said Dr. Jochen Schröder, head of Schaeffler’s E-Mobility business division. For Schaeffler, developing processes such as forming and coating for extremely thin steel parts like bipolar plates has largely been a case of adapting processes that it has already been using for many years in the manufacture of motor and transmission components.

Efficient industrialization of components for fuel cell systems
Schaeffler is also leveraging its bearings know-how to develop various axial and radial air foil bearings for fuel cell air supply, nozzles for hydrogen recirculation, and key components for the coolant management system, including a thermal management module and smart valves for decentralized coolant regulation. In addition, the company is continually growing its expertise and capabilities in fuel cell system control, including software modules for fuel cell-specific functions.

Demonstration vehicle highlights Schaeffler’s systems expertise
In all aspects of its fuel cell development and optimization work, Schaeffler maintains an uncompromising focus on producing components and subsystems that work together efficiently as integrated systems. Its hydrogen experts have built a complete fuel cell system specifically for mobile applications and have incorporated it into a demonstration vehicle. The vehicle will be unveiled to the public for the first time at the IAA Transportation show (booth U47 on the open-air site). It features a 13 kWh battery with a maximum power output of 85 kW, and a fuel cell system rated for a continuous output of 50 kW. Propulsion is provided by a Schaeffler 3in1 e-axle, complete with power electronics, with a maximum output of 140 kW. Schaeffler is using the vehicle as a development platform for testing and optimizing the interaction between the various system components.

Joint venture for large-scale production of bipolar plates
The key to achieving widespread use of fuel cell powertrains is to manufacture the components and subsystems at scale so as to make them as cost-effective as possible. This focus on industrialization is a core part of Schaeffler’s strategy. By partnering with Symbio, a hydrogen technology joint venture between Faurecia and Michelin, to establish Innoplate, Schaeffler aims to transition its bipolar plates into industrial production at the start of 2024. The partners in the Innoplate joint venture intend to produce plates for both mobile and stationary applications. The joint production facility will be located in Haguenau, France, and will initially have an annual output of four million plates, increasing to approximately 50 million by 2030. “The objective of the joint production operation between Schaeffler and Symbio is to achieve major economies of scale, which are essential in order to produce stacks cost-effectively,” Schröder said.

To verify the feasibility of manufacturing its bipolar plates on an industrial scale, Schaeffler set up a pilot production plant at the start of 2022. The plant is designed in such a way that it can be used to manufacture bipolar plates in sizes ranging up to the larger 1,800 by 600 mm formats used in electrolyzers. The individual process steps performed by the pilot plant, which was designed in partnership with Schaeffler’s in-house Special Machinery unit, are already fully automated. The pilot plant is part of a new hydrogen center of excellence at the company’s Herzogenaurach location, which includes a large testbed for testing electrolyzer and fuel cell technologies at the component, stack, and complete system levels.

You will find Schaeffler at Booth B37 in Hall 12 and at Booth U47 on the open-air site. 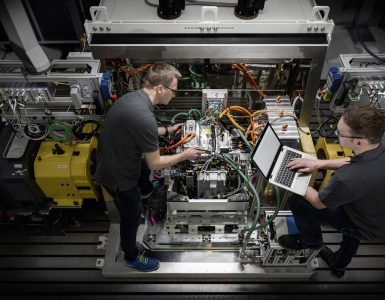 Today, the company inaugurated a new center of competence in software and electronics development in Pune, India. 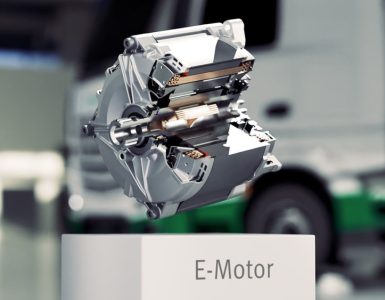 Schaeffler develops high-performance electric motors for commercial vehicles that are over 97 percent efficient. 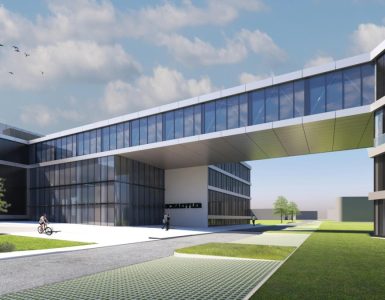 Schaeffler to Expand its E-Mobility Development and Manufacturing Campus

Schaeffler is expanding its existing electromobility development and manufacturing campus in Bühl, Germany, by adding a new building complex.