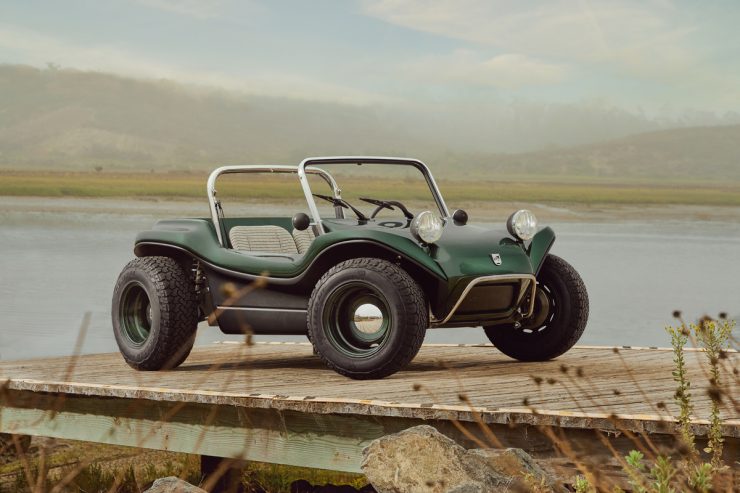 Meyers Manx unveiled the Manx 2.0 Electric on Monday, August 8, at a private event in Malibu, California ahead of its official debut.

Meyers Manx unveiled the Manx 2.0 Electric on Monday, August 8, at a private event in Malibu, California ahead of its official debut at The Quail, A Motorsports Gathering. This first-of-its-kind electric vehicle encapsulates the authentic feel and heritage of the original Meyers Manx, reimagined for the contemporary age with an environmentally friendly ethos.

The Meyers Manx was created in 1964 by Bruce Meyers as a go-anywhere dune buggy dedicated to adventure and fun. His groundbreaking creation became an American classic for both its whimsical design and its remarkable performance. Manxes did it all: In 1967, after breaking the speed and time records for driving the distance of Baja and winning the inaugural Mexican 1000 outright in the same year, the roadster was driven by everyone from Elvis to Steve McQueen. This quintessentially Californian icon became a pop culture cornerstone of the 1960s and 70s.

Noted venture capitalist Phillip Sarofim acquired the brand from Bruce and Winnie Meyers in 2020 through his firm Trousdale Ventures. He appointed legendary auto designer Freeman Thomas to serve as the company’s CEO and to design the Manx 2.0 Electric. Bruce Meyers passed away in 2021, but his legacy lives on through the revitalized brand.

“The Meyers Manx has always been a symbol of joy, simplicity and purity. It’s the solution to the complexity of life,” said Sarofim, Chairman, Meyers Manx. “Continuing the legacy of the Meyers Manx connects us with the optimism of the 1960s California culture, an optimism we all can share.”

Meyers Manx is partnering with a U.S.-based manufacturing entity to bring the Manx 2.0 Electric into production in 2023, with final assembly taking place in California. The Meyers Manx Beta program will deliver the first 50 cars to select customers in 2023. The launch vehicles will provide a unique engagement experience with the group of early adopters by providing feedback to the development team as they refine the production version.

“Knowing Bruce’s artistry and Phillip’s enthusiasm for the brand, I am so glad that Bruce trusted us to carry his legacy into the future. The new Manx 2.0 Electric is designed to exceed expectations. It’s simple and endearing and taps into the spirit of playfulness. The ageless design brings out your inner child. It’s about passion,” said Thomas.

The Manx 2.0 Electric will be publicly unveiled at The Quail, A Motorsports Gathering at the Quail Lodge & Golf Club, in Carmel, California, on August 19.