MAN on Track for Production of Large-Series Electric Truck 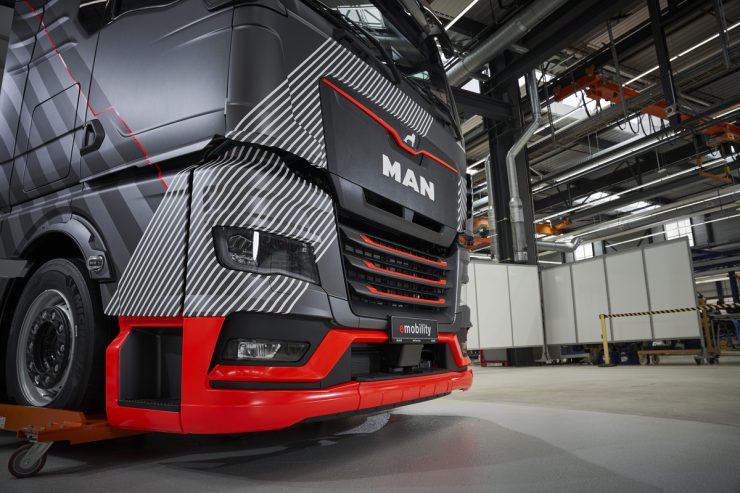 Preparations for large-scale production of electric trucks from Munich are on track after successful first year at MAN eMobility Center.

Preparations for large-scale production of electric trucks from Munich are on track: In the first 12 months since the innovative eMobility Center was established at its main plant, MAN Truck & Bus has rolled out 20 prototypes of the upcoming heavy-duty eTruck, testing future mixed series production with conventional trucks under real-life conditions. The new eTruck made its first rounds in Berlin at the end of May. In Munich, 1700 employees have so far been trained in the CO2-free technology of the future.

When the MAN eMobility Center opened in mid-June 2021, it was already clear that the future was being created here: it was a clear starting signal for the modernization of the site as part of the transformation and also for the coming series production of electric trucks at the main plant in Munich. “MAN is preparing for the future of electromobility and driving forward its transformation into a provider of sustainable transport solutions for climate-friendly road freight. Our heavy-duty eTruck is scheduled to roll off the production line in Munich in early 2024. To this end, we are now training employees in high-voltage technology and making our production at our main plant in Munich more flexible,” says Alexander Vlaskamp, CEO of MAN Truck & Bus, on the one-year anniversary of the eMobility Center in Munich.

The production of electric trucks in large industrial quantities requires new production processes. Compared to the conventionally powered truck, the electric truck differs in terms of new components such as the electric battery and motor as well as high-voltage components and cables. In addition, conventional and battery-electric trucks will be produced on the same production line in the future to ensure the best possible utilization of the production facilities in Munich. This is a major challenge for machines and technology, but also for employees, as Thorsten Campehl, plant manager in Munich, knows: “We have to win people over to the change and support them in the process of these fundamental changes. A clear vision for the plant and the training and development of people are the key to achieving this.” More than 1,700 employees have already completed the high-voltage awareness training, and by the end of the year this figure will have risen to 2,000. By the end of 2023, all relevant professionals in truck production in Munich are to be qualified for series production of electric trucks. “It is the intensive combination of theory and practice that makes the concept of the eMobility Center truly unique,” Campehl continued.

Testing and development for mixed production

For the complex mixed production, the aim from the outset is to develop modular components, particularly for the chassis and wiring, that can be used by both drive concepts to enable either the conventional combustion engine and transmission to be installed or the battery modules and electric motor to be assembled on one assembly line. The innovative concept of the MAN eMobilty Center aims to develop the necessary processes for future series production directly during the manufacture of the first prototype vehicles and, at the same time, to train and qualify employees in the use of the new technologies. At the same time, requirements for subsequent series production can also be incorporated into vehicle development from the outset. Specialists from the eMobility Center, series assembly, and the MAN Academy, as well as start-up experts, designers, and process planners, work together cross-functionally to bring the new trucks to series maturity as quickly as possible with proven expertise and innovative concepts, and to put them on the road with the highest quality and added value for the user. To this end, the individual workflows and process steps are mapped with pinpoint accuracy and any necessary adjustments are taken up and implemented directly by the vehicle developers. The results are clear to see: pre-series planning and testing have already become much more efficient. The first small series of the electric truck is to be produced on the normal production line as early as the end of 2023, with the aim of entering practical use with selected pilot customers from 2024.

MAN gave a preview of the new series-produced e-truck, which will make its official market debut in 2024, back in May in Berlin. On the site of the former Berlin Tempelhof Airport, MAN took one of the first near-production prototypes already built at the eMobility Center out for a public drive for the first time in the presence of German Federal Minister for Digital and Transport Dr. Volker Wissing. A special technical feature of the pioneering electric lion is its preparation for future megawatt charging: high charging capacities with short charging times make the electric truck suitable for heavy-duty long-distance transport with daily ranges of between 600 and 800 kilometers. Together with low operating costs and the best energy balance, battery electric vehicles thus offer the most suitable technology for future CO2-free commercial vehicle fleets. 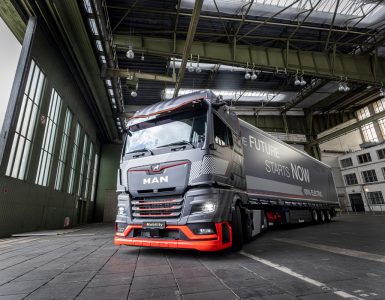 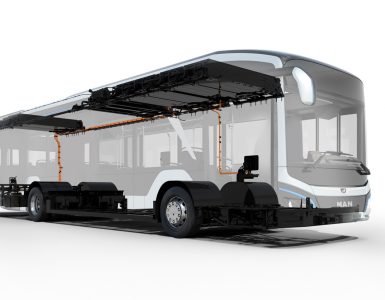 MAN Truck & Bus will in future be offering an eBus chassis for the global market. This is based on proven technologies from the Lion's City E.