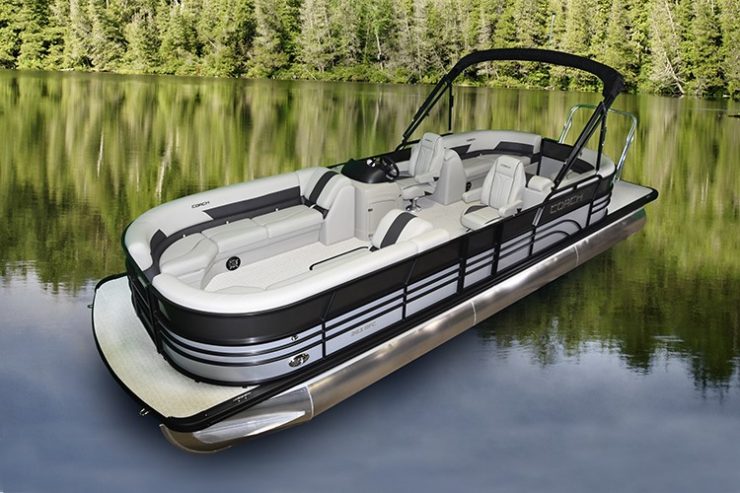 Hercules Electric Marine, today announced it has reached an agreement with CMG to supply CMG with electric propulsion systems.

Hercules Electric Marine, today announced it has reached an agreement with Coach Marine Group (CMG) to supply CMG with electric propulsion systems for use in its Coach and Xcursion branded pontoon boats. The companies have entered the final design and integration phase in which they will partner to tailor the Hercules e-Drive system to CMG’s exact specifications to deliver a superior experience for Coach & Xcursion pontoon customers.

CMG intends to produce up to 1,500 electric pontoons annually featuring an electric inboard/outboard motor powered by the Hercules e-Drive system. Financial terms of the agreement are not being disclosed.

Hercules expects to deliver its initial e-Drive systems to CMG in the fourth quarter, enabling CMG to get electric-powered pontoons to its North American dealer network as early as May 2023.

“We’re thrilled to partner with an industry leader like Coach to bring state-of-the-art electrification technology to the marine industry without sacrificing performance,” said James Breyer, CEO of Hercules.

“By working together, we’re confident this will be a successful venture for both parties,” said Chris Riddle, CMG CEO. “This is a collaborative effort from design to sales. We’re looking forward to the retail boat show season and other display opportunities this year, showcasing the power, performance and quiet luxury that comes with a Hercules e-Drive mated to a Coach pontoon.”

Stringent regulations, such as those set by the California Air Resource Board (CARB), to reduce emissions from engines in boats and other recreational vehicles go into effect at the beginning of 2023. Electric powertrain systems in boats not only remove emissions, they also eliminate the need for gasoline or diesel fuel and the associated risks.

“Electrification makes for a clean and quiet boating experience, while also opening key areas on the deck of our pontoon for more usable space,” Riddle said. “The Hercules e-Drive makes boating on a Coach or Xcursion pontoon even more fun without any compromises.”

CMG pontoons powered by the Hercules 200-kilowatt e-Drive system will have a top-end speed above 40 mph and approximately 12 hours of cruising time between battery charges. Programmable software enables users to customize power levels for optimal range or to meet waterway horsepower or speed restrictions.

“Our powerful, ultra-clean and quiet e-Drive system, derived from advanced automotive technology and developed under a robust design process, can be applied across recreational mobility to enhance performance and ownership experience without the negative environmental impacts that come with combustion engines,” Breyer added.