FLO, has announced plans to open its first U.S. manufacturing facility in late 2022 to accelerate execution of its U.S. market strategy.

FLO, have announced plans to open its first U.S. manufacturing facility in Michigan in late 2022 to accelerate execution of its U.S. market strategy. FLO expects that the facility in Auburn Hills, north of Detroit, will make a major contribution to Michigan’s electrification future. FLO plans to produce more than 250,000 EV chargers by 2028 for the U.S. market. The facility is expected to create 730 direct, indirect and induced jobs by 2028.

“The future of EVs is in Michigan. We are proud to announce our facility today – our first in the U.S. – that will not only create jobs for Michiganders, but also help meet rising demand for smart, reliable charging stations, and to continue to expand the FLO network across the USA,” said Louis Tremblay, FLO president and CEO. “Thanks to President Biden and Governor Whitmer for supporting policies that will transform the future of mobility and electrification of vehicles.”

The Auburn Hills manufacturing facility will also include an advanced testing lab which will ensure FLO chargers offer the best experience with all EVs. The advanced testing lab’s location in Michigan puts it in close proximity to leading American car manufacturers and will allow FLO to achieve increased charging alignment to new EVs arriving on the market in coming years, increasing the level of experience to FLO’s customers and new EV owners.

As EV adoption grows, so do state and federal efforts to create an EV-friendly environment for both consumers and companies. President Biden’s Infrastructure Investment and Jobs Act included $5 billion in funding to build a national charging network that will put the U.S. on the path to make EVs accessible to all Americans for both local and long-distance trips.

In February, Governor Whitmer announced Michigan will receive $110 million over five years in formula funding to build up electric vehicle charging infrastructure and help the state continue leading the future of mobility and electrification.

“We are proud to welcome FLO to Michigan and serve as the home for their very first manufacturing facility in the United States,” said Governor Whitmer. “As we look toward growing our economy, investing in our workforce, and creating good-paying jobs, we know the importance of leading the transition to electric vehicles. FLO’s presence in Oakland County builds on our tradition of automotive manufacturing with an eye toward our electrified future. This announcement is the latest in a series of recent, major investments in Michigan’s economy, and I could not be prouder that the world’s manufacturing leaders know Michigan is the place to be.”

According to the Department of Energy, sales of new EVs in the United States grew by 85 percent since 2020, and automotive executives believe more than half of their sales will be EVs by 2030. The Auburn Hills facility is expected to be a cornerstone in FLO’s effort to expand in the U.S. market, joining a nationwide collective of organizations supporting EV efforts as more Americans switch to EVs.

“DTE is building the grid of the future to support economic growth and electrification for the state,” said Tony Tomczak, DTE vice president of electric sales and marketing. “We are excited for FLO to open its Michigan facility and for partnership opportunities in the future.”

An economic report released by BW Research, estimates the FLO manufacturing facility will generate $134 million in revenue from sales of EV chargers produced at the facility and $76 million in gross state product in the state of Michigan by 2028. The facility itself will generate 500 jobs and another 230 jobs in industries unrelated to the manufacturing facility that benefit from the increased economic activity in Michigan.

This facility is a major step in FLO’s expansion into the U.S. market. FLO has already installed thousands of charging stations in New York City, Southern California, and many other areas across the U.S. with plans for further expansion to meet the needs of consumers nationwide. 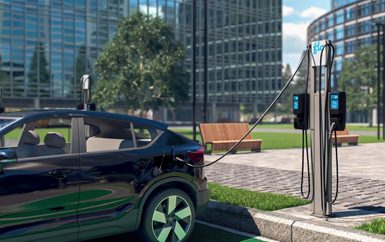 Today, as part of its participation in the NADA annual trade show in Las Vegas, FLO is officially introducing its fastest level 2 EV charger.