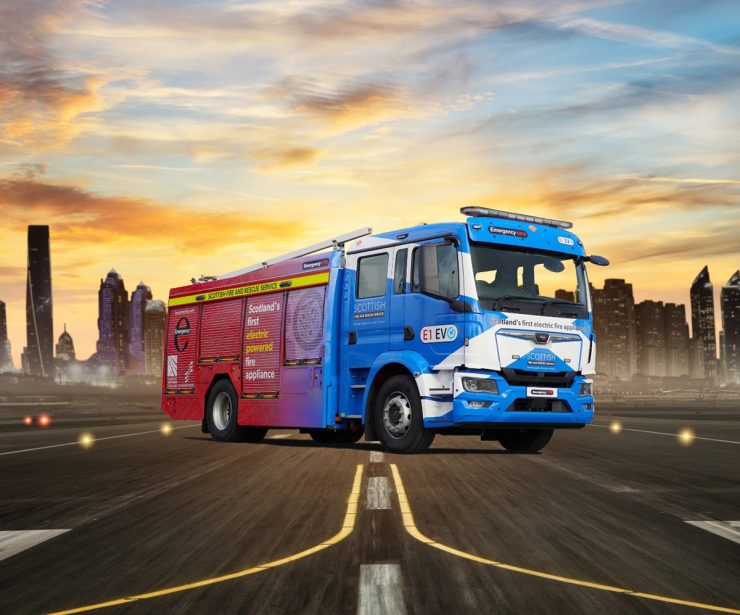 Not only do they manufacturer fire engines (including electric) but they also specialise in a wide variety of appliances.

In recent years, the move towards a more carbon efficient economy has gathered pace worldwide. Fire Services are certainly not immune to this move, with pressure being increased on councils and local governments to follow suit on every aspect in which they operate. In the last decade, the imposition of zero and / or ultra-low emission zones in high population density areas has increased to a rate where they are no longer just seen in major cities but in many larger urban areas. In fact, in some countries, this move is even seen in “regenerative tourism” and leisure locations such as holiday resorts.

Fire and Rescue Services (FRS) are being asked to reflect the green credentials and environmental standards of the councils and geographical areas in which they work. All these factors mean that the design of FRS vehicles and equipment is undergoing fundamental change – one that challenges traditional thinking and methods of operation. For any FRS to ensure that it delivers operationally to fulfil their key objective – Save and Rescue endangered life – there needs to be a confidence and assurance that these new systems are robust and trustworthy.

Whilst some manufacturers are producing zero emission chassis cabs, these cater for other sectors such as passenger transport, general haulage and refuse collection. These chassis cabs are largely unsuitable for FRS use as their drivetrains are designed for applications with far more predictable duty cycles and usage.

Emergency One UK Ltd (E1) aim to tackle this issue. The British fire engine manufacturer released their first fully electric fire appliance, the E1 EV0™, back in 2020. Since the launch, the original E1 EV0™ was sold to London Fire Brigade. Another has been built for Scottish Fire and Rescue Service and a further unit confirmed for Hérault Fire Service in France later next year, all in addition to various conversions for E1’s North American partner.

Exceeding where others have struggled, the E1 EV0™ range can be adapted to any chassis, and meets the requirements of BSEN 1846 and NFPA 1901. For many years, the idea of a zero-emissions fire appliance was thought impossible due to the nature of the tasks undertaken and the complexity of duty cycles. The nature of the FRS is to study risk and likelihood, and it is a paradigm shift in thinking about likelihood that is required to see that duty cycles, whilst unreliable, are not entirely unpredictable. E1 carried out extensive testing to ensure that the electric range of their fire engines were able to meet all the criteria of the Fire Services and cover at least 95% of incidents that the vehicle was required to attend on battery power alone. To many, batteries are seen as a threat to operations, with reliability and range anxiety often quoted as reasons to resist change. However, evidence now shows that Emergency One’s battery technology allows vehicles to travel 300 kms and have a pumping time in excess of 4 hours. Optional on-appliance range extenders provide for even greater operational flexibility.

Not only do they manufacturer fire engines (including electric) but they also specialise in a wide variety of appliances; from aerial appliances and ultra-lightweight industrial vehicles to technology leading Incident Command units and airport solutions, there’s nothing they can’t do! Visit www.e1group.co.uk for more information.