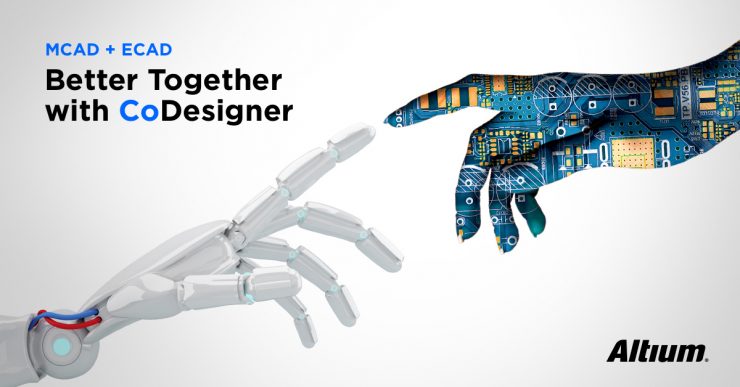 During the design process of any complex electronics product, both mechanical and PCB designers are continually importing, exporting, and converting files in an effort to keep mechanical and electronic designs in sync. This adds hours of manual labor, data loss, and rework to the design process—and yet engineers on both sides are still working in serial, and largely isolated from each other.

“Export and import of files is what most EDA companies are calling co-design,” says Ted Pawela, Chief Ecosystem Officer at Altium. “That’s like sending someone a letter in the mail and calling it collaboration. Altium CoDesigner simply keeps MCAD synchronised with ECAD so that electronic and mechanical design teams can truly work concurrently.”

Altium’s CoDesigner capability gives PCB designers using Altium Designer (with an active subscription) a much faster and easier way to collaborate with mechanical designers working with tools like PTC Creo, Dassault Systèmes SOLIDWORKS®, Autodesk Inventor, and Autodesk Fusion 360®. Mechanical engineers can use CoDesigner capability at no cost and while staying in their favorite MCAD design environment.

“With CoDesigner capability, we can detect potential problems like we couldn’t before,” reports Jeremie Waller, Sr. Electrical Engineer at Quantel Laser USA, a division of Lumibird, a global leader in laser technology. “We can see silkscreens, hidden vias, make sure polarities are correct, where copper traces are—our models are now 100% complete, including overlay and copper. I don’t have to worry about board shapes, or connector placements, even in very tight spaces. With CoDesigner capability, we have the confidence that everything will fit exactly as planned when it goes to manufacturing,” Waller adds.

To set up CoDesigner, mechanical engineers only need to download a free plug-in from the Altium website or the MCAD plug-ins page inside Altium 365 for their MCAD tool. Once they’re ready to share, mechanical designers can just synchronize their MCAD tools with Altium Designer and Altium 365.

Paul Spendley is a Senior Electronic Engineer at YASA Ltd., a manufacturer that specializes in electric motors, controllers, and powertrain solutions for hybrid and electric automotive and aerospace manufacturers. For Spendley, the combination of Altium 365 and CoDesigner has completely changed the way his team works.

As he explains, “MCAD/ECAD collaboration before CoDesigner was emailing STEP files; sometimes they would open, sometimes they wouldn’t. Components would get lost, so it would take us multiple iterations to get designs right. On the ECAD side, this required at least 3-4 steps that took about 10 minutes each; and on the MCAD side, it took hours.”

The addition of CoDesigner has changed this process completely. “Our mechanical designers always have the most up-to-date ECAD design. I can push the latest design changes directly to their MCAD tool—we have a two-way design process now,” Spendley reports.

Laine McNeil, Sr. Mechanical Engineer at Quantel Laser USA, concurs. “Before we started using Altium’s CoDesigner, there was an element of ‘Us vs. Them.’ It is a much more collaborative process now. We no longer lack context when working with our PCB design teams.”

Accessing CoDesigner is easy for both ECAD and MCAD users. The MCAD CoDesigner extension is included in the standard Altium Designer installation, appearing as a panel that’s always available in the PCB editor. Once MCAD users install the aforementioned plug-in, CoDesigner is just as effortlessly accessible.

For Thomas Pottle, Electronic Design Engineer at AERQ, a leading digital cabin technology firm, Altium CoDesigner has been a huge time saver. As Pottle explains, “Before we started using CoDesigner, we were manually transferring files over email, from ECAD to MCAD only. In just one project, I generated over 40 files in ECAD, with each taking about 30 minutes to upload into my MCAD software. This was especially frustrating when files didn’t work, and I had to spend hours trying to figure out why.”

“Using Altium 365 and CoDesigner has been a quantum leap in our design process. And CoDesigner’s right there inside Altium Designer—I can’t imagine not using it,” Quantel’s Jeremie Waller concludes.