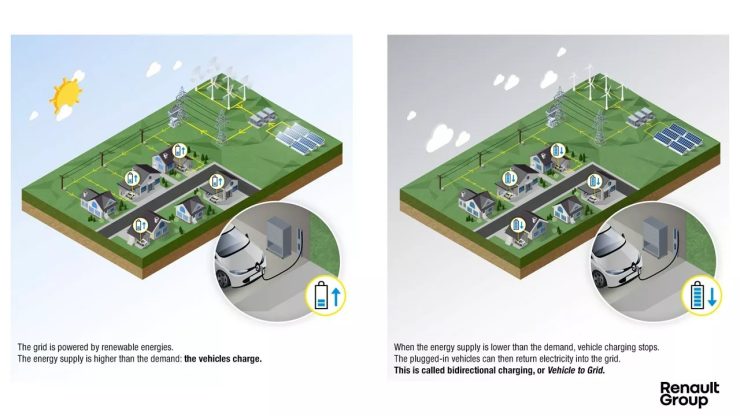 The bidirectional charger will also allow the connected vehicle to inject energy from the battery into the electrical network.

What if the vehicle became a pillar of the electricity network? This is the principle of V2G, or vehicle-to-grid, a bidirectional exchange technology that will soon enable Renault vehicles to restore part of the electricity stored in the batteries to optimise the operation of the grid and compensate for the intermittent nature of renewable energies.

On this subject, and to go even further, the CEA, a major player in research, and Renault Group, a pioneer and expert in electric vehicles, are already working on future generations of these V2G technologies which will be deployed by the end of the decade. To this end, the CEA and Renault Group have jointly developed a new electronic power converter architecture directly integrated into the vehicle’s charger. The result of nearly three years of research and the subject of 11 joint patents, this power converter1, developed from innovative materials and more compact, will reduce energy losses by 30%, improve the vehicle’s recharging time and guarantee the battery’s durability. Better still, it will be bidirectional by storing energy from the electricity network.

The CEA and Renault Group R&D teams have combined their expertise in the field of on-board power electronics, in particular in the field of wide band-gap semiconductor materials, whether in Gallium Nitride (GaN) or Silicon Carbide (SiC).

As a result, the new architecture based on the wide band-gap semiconductor materials makes it possible to reduce energy losses by 30% during conversion, and to reduce heating by the same amount, making it easier to cool the conversion system.

Reducing the volume of the loader

In addition, the engineers’ work to optimise the active (semiconductors) and passive (capacitors and wound inductive components) components has enabled a reduction in the volume and cost of the charger. Thanks to the use of ferrite materials, dedicated to high frequency, and a shaping injection process called “Power Injection Molding”, the converter has become more compact.

This new converter architecture offers a charging capacity of up to 22kW in three-phase mode, allowing for faster charging of the vehicle while ensuring the durability of the battery. It also allows the charger to be bidirectional, so that the energy stored in the battery can be fed back into the grid or used to supply the energy needs of an autonomous house, provided that the house is equipped with a bidirectional meter. The solution is compatible with the electromagnetic compatibility (EMC) standards of the networks and the car. 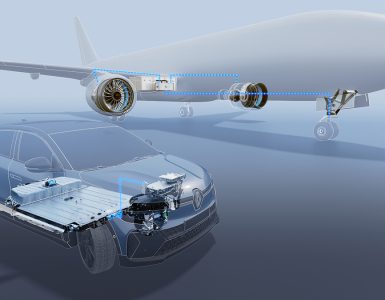 Airbus and Renault Group to Advance Research on Electrification

Airbus and Renault Group, have signed a research and development agreement which aims at enhancing transversalities and synergies. 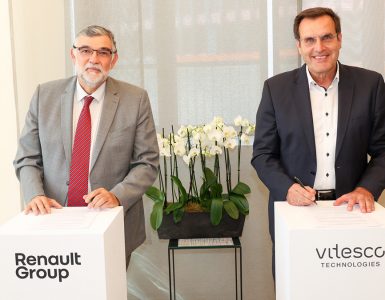 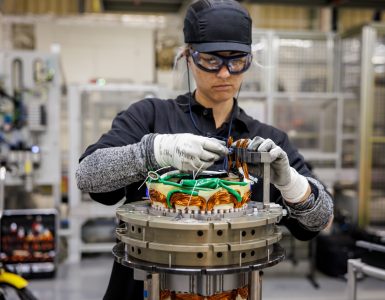 Renault Group inaugurates a new production line for electric motors at the Cléon plant and further accelerates its electric transformation.