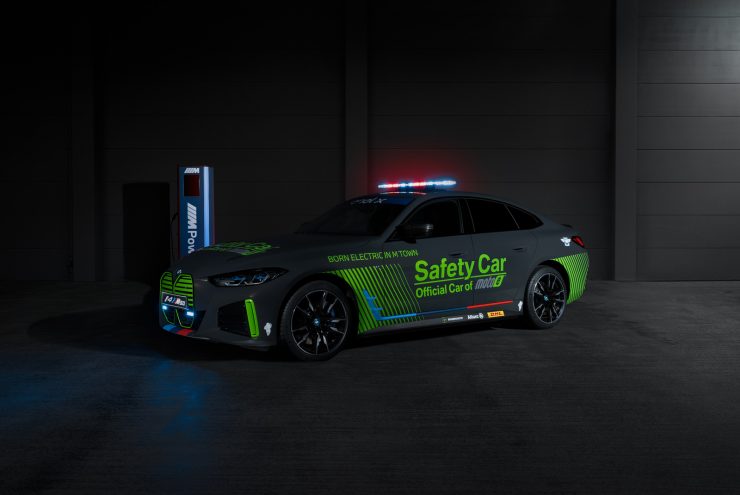 Presenting the first fully-electric safety car from BMW M: BMW M GmbH, the “Official Car of MotoGP™”, will unveil the new BMW i4 M50 Safety Car for the FIM Enel MotoE™ World Cup at the Motorcycle Grand Prix of Austria on 15th August at the Red Bull Ring (AUT). It will replace the BMW i8 Safety Car, which has previously led the field in the electric motorcycle series, which takes place on the support programme for MotoGP™.

The new safety car for the FIM Enel MotoE™ World Cup is based on the BMW i4 M50 (power consumption combined: 22.5 to 18.0 kWh/100km WLTP; CO2 emissions combined: 0 g/km WLTP*), which will be launched in November 2021. The first fully-electric performance car from BMW M GmbH will provide intense driving pleasure. With an electric motor on both the front and the rear axle, generating a total output of 400 kW/544 hp, and M-specific chassis technology, it offers captivating driving dynamics. The emotional driving experience is underlined in particular by the drive sound, which has been developed specifically for electric BMW M cars. With all its properties, the BMW i4 M50 forms the perfect basis for use as a safety car in MotoE™.

“With the BMW i4 M50, we are entering a new era and presenting our first M with a fully-electric drive train,” says Markus Flasch, CEO of BMW M GmbH. “With the first M BEV, we are setting course for a future, in which the combination of extremely sporty, performance vehicles and electrification is an exciting theme. We are showing that everything people have come to value about M – the typical emotional M driving experience with sportiness, power and dynamics – is also possible in a fully-electric vehicle. While the production version of the four-door Gran Coupé will hit the market in the autumn, our fans can enjoy its world premiere at the racetrack this summer. There could not be a more appropriate safety car for MotoE than the BMW i4 M50 – pure performance, fully-electric. We are looking forward to the premiere in Spielberg.”

The FIM Enel MotoE™ World Cup has been part of the MotoGP™ world championship since 2019. The fully-electric series, with Energica motorcycles, offers thrilling head-to-head races and exciting battles at some of the most iconic circuits in motorcycle racing.

Find out more about the first fully-electric safety car from BMW M, by visiting www.bmw-m.com