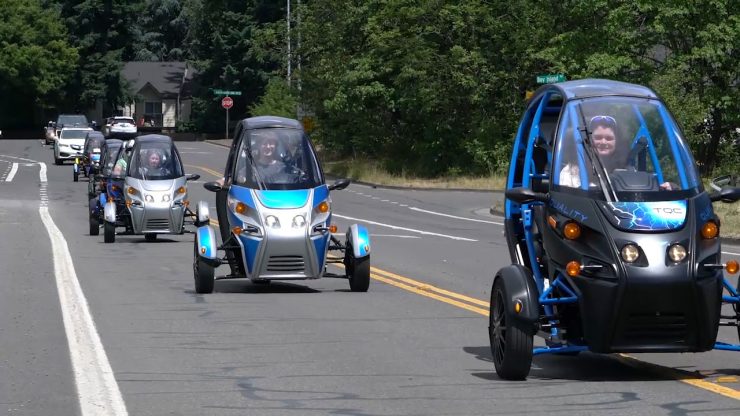 Arcimoto, makers of fun, affordable, and ultra-efficient EVs for everyday drivers and fleets, demonstrated the first ever driverless FUV.

Arcimoto, makers of fun, affordable, and ultra-efficient electric vehicles for everyday drivers and fleets, and its partners debuted the first production Roadsters, demonstrated the first ever driverless FUV, unveiled new torque vectoring technology that will improve handling of all Arcimoto vehicles via a future software update, and revealed the Arcimoto Flatbed utility vehicle at this year’s FUV and Friends Summer Showcase at the Portland International Raceway on July 26.

“At the end of the day, sustainability is a social networking exercise: through dedicated collaboration with outstanding partners we believe we can make real the vision of a truly sustainable transportation system,” said Mark Frohnmayer, Arcimoto Founder and CEO. “It’s an honor to unveil the amazing work of our team and our partners as we push resolutely toward a clean transportation system that will work for everyone, everywhere. As the challenges of climate change mount seemingly every day, one thing is clear: the way forward is together.”

Arcimoto unveiled the first production Roadsters, designed to be the ultimate on-road fun machines, which were outfitted with prototype accessories including a surf rack, a OneWheel carrier, and the Doge Carrier sidecar. “From the very first ride, I knew the Roadster would deliver a ride like no other machine on the road. It’s the purest incarnation of the Arcimoto Platform: low and forward center of gravity, the dual-motor front wheel drive system that pulls you down the road, and the ability to actively shift your weight in concert with the ride. The Roadster is an extension of your will to move, and we are very excited to bring it into the world,” said Frohnmayer.

Stafl Systems, founded by brilliant electrical engineer and Arcimoto alum Erik Stafl, demonstrated a new torque vectoring technology that dramatically improves steering at low speeds. The improvements are planned for all Arcimoto vehicles via a software update expected to be released in 2022. The torque vectoring implementation is part of a broader effort to enable true drive-by-wire in order to lay the foundation for autonomous and remote-controlled Arcimotos. “This is a game changer, and the single biggest improvement to the handling of our vehicles since we unveiled Arcimoto’s Generation 8 prototype in 2016,” said Frohnmayer.

Faction Technology, based in South San Francisco, demonstrated the first ever driverless FUV using remote control, a step forward toward true ride-on-demand, where riders will be able to summon a vehicle to their location and then hop in and drive. “Our vision is very much in line with Arcimoto’s mission, which is to rightsize transportation for both delivery and ride on demand, ” said Ain McKendrick, Faction Founder and CEO. “Driverless combines autonomy with the ability to remote assist a vehicle when you need it, because the magic is really when the vehicle arrives driverlessly.”

Eugene-based SherpTek, makers of precision engineered truck decks and truck trays designed to be the lightest on the market, unveiled the first two prototypes of the Arcimoto Flatbed, built based on feedback from the City of Orlando following a joint municipal pilot program in 2020. “We utilized every single square inch of space that we could,” said Ryan Goodwin, CEO and Founder of SherpTek while demonstrating a fully loaded Flatbed. “This thing is packed with all my mountain biking gear, all my kiteboarding gear, my stand-up paddleboard for whitewater… It’s got a cooler full of drinks, a table, a chair, a yoga mat. It’s outfitted for a day full of activity.”

Oregon Governor Kate Brown addressed the crowd to open the Showcase just prior to signing House Bill 2021 on Tuesday, which lays out one of the most aggressive timelines for eliminating carbon dioxide emissions in the country. “House Bill 2021 will make sure Oregon will have the most progressive clean energy standard in the entire country— 100 percent clean, green by 2040,” she said. “Clearly climate change is here and we have to do everything in our power to move forward and tackle it. Arcimoto is the only [public] EV company in Oregon, but it’s not going to be the last if I have anything to say about it.”

For more information on the driverless FUV, and other Acrimoto EVs please visit Arcimoto.com. 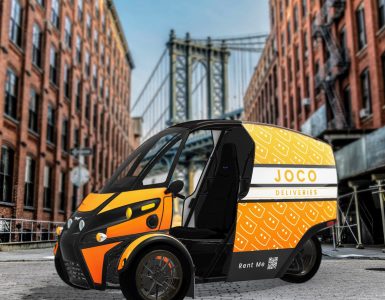 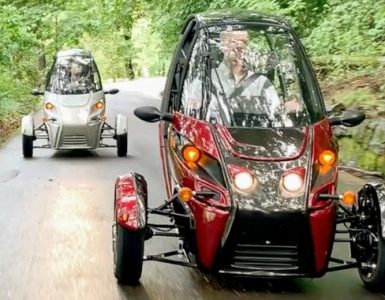