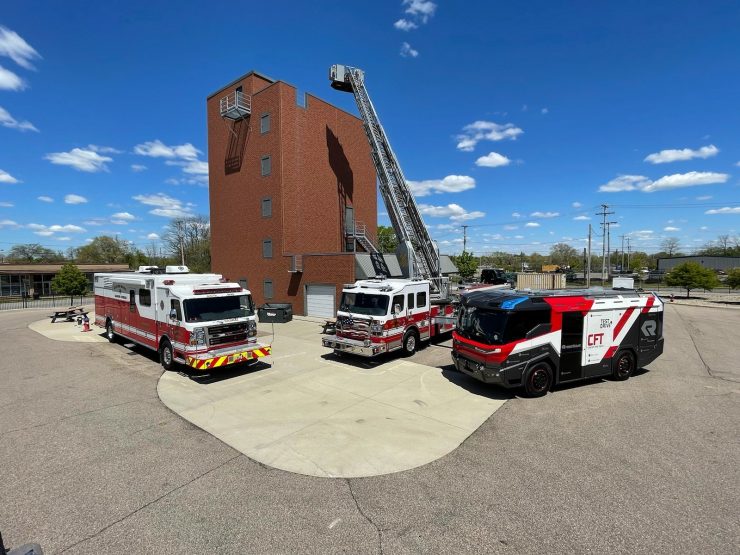 America’s first electric fire truck was on display today in South Bend, Indiana. This visit comes just as Congress takes up consideration for an infrastructure and jobs plan to dramatically improve the overall quality of American roads, bridges and other critical investments.

In attendance were firefighters and key decision makers from multiple cities, including South Bend, IN, Indianapolis, IN, Chicago, IL and St. Louis, MO.

Developed by Rosenbauer America, the Revolutionary Technology (RT) is a concept truck that is safe, powerful and emissions free.

“The Rosenbauer RT is the fire truck of the future,” said John Slawson, CEO and President of Rosenbauer America. “Built from the ground up using the most advanced materials and technologies, the RT is the safest fire truck on the road today – for firefighters, for communities and for the environment.”

The RT is America’s first fully electric apparatus and boasts a high level of safety, excellent driving dynamics and maneuverability, innovative safety features, and is fully networked. These features and more make the RT the most modern emergency vehicle on the market and sets an entirely new standard within the fire industry.

Environmental benefits of the RT include:

“We are honored to introduce the future of firefighting to our country’s fire fighters and decision makers,” concluded Slawson. “Rosenbauer America and its local dealers are committed to supporting the RT electric fire truck in local communities throughout the United States and Canada in the coming years.”

Find out more about the electric fire truck and the technology by visiting www.rosenbauer.com